KWH Logistics is Finland’s biggest port operator and the leader in Russian transit traffic. The Group also operates in a number of other logistics areas.
KWH Logistics grew fast throughout the past decade. The driving factors behind the growth were restructuring in the sector, the outsourcing trend in the industry and higher flows of goods through Finland.

In 2019, KWH Logistics invested more in one year than ever before. The record investments amounted to a total of EUR 96 million (of which EUR 18 million caused by IFRS16). The new investments consolidate KWH Logistics’ position as the Finnish port operator with by far the highest geographical coverage. Via its subsidiaries, KWH Logistics operates in all deep-water ports in Finland.

The growth in sales was more moderate in 2019 than in previous years. However, it is already clear that the investments pave the way for considerably higher sales in 2020 and, above all, in 2021.

The single biggest investment (tens of millions of EUR) was in a system for bulk handling. Construction began in 2019 in the deep-water port of Tahkoluoto in Pori. The subsidiary Rauanheimo will start using the system in summer 2020. The system permits environmentally friendly, dust-free bulk handling using covered conveyors and electric power.

Another major investment was made in Koverhar Port in Hanko, where Rauanheimo began operating in December 2019. Koverhar is an old industrial port which is now being converted for commercial use.

Yet another major investment began in Mussalo in Kotka in 2019, where Rauanheimo is investing in an expansion of bulk handling and storage. The new stores and lines will be taken into use in August 2020.

The subsidiary Blomberg Stevedoring also invested in new buildings in the port area in Vaasa, where there were major changes in 2019 on account of Wärtsilä’s new construction right next to the port. 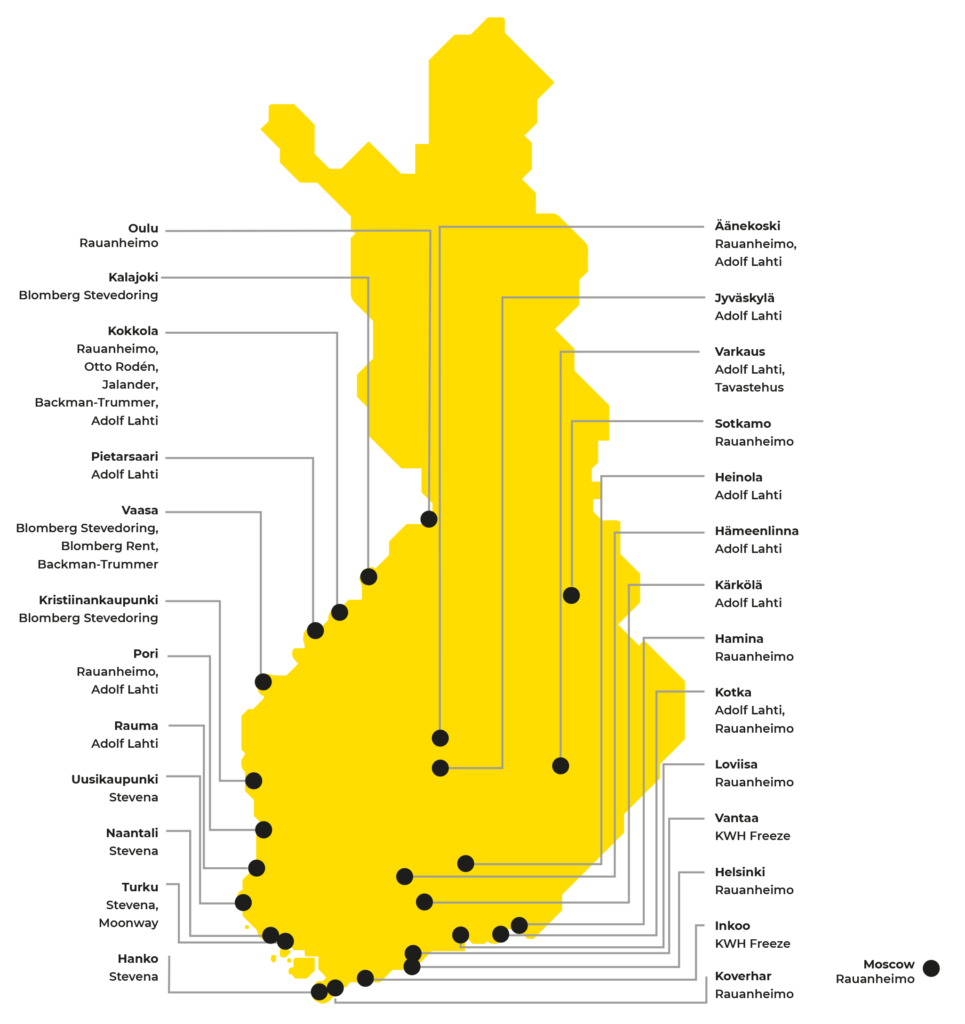 Brand renewal shows the size of the company

As KWH Logistics’ brand image had not kept pace with its rapid growth in recent years, a process began to renew the brand. In 2019, all subsidiaries in the Group were given the same visual identity to create a more uniform external image. Another underlying idea with the brand renewal was to give the parent a stronger profile as the Group was previously known primarily via its subsidiaries. It was also decided to use the marketing name KWH Logistics for the entire Group. The new brand image was given a high-profile presentation at the transport and logistics fair in Helsinki in May 2019.

In addition to the logo and visual profile, the brand renewal process also involved the development of new messages for the company. KWH Logistics’ brand promise is that it creates smart total logistics solutions that improve customer competitiveness. A customer survey carried out in connection with the brand renewal clearly showed that KWH Logistics’ biggest competitive advantage is its strong investment capacity.

Investments in HR and sustainability

The growth of the Group has meant that KWH Logistics also has invested more in support functions. The HR department was expanded in early 2019, and a new intranet is being introduced throughout the Group to improve information flow. Several other digitalization projects are also under way.

KWH Freeze, which is part of the Group, is by far the biggest frozen storage operator in Finland. The whole of 2019 was characterised by the same strong growth for KWH Freeze as in 2018. The growth is partly a consequence of Finns eating more frozen food but is primarily due to the restructuring in the food industry.

In early 2020, KWH Freeze started using an 8,000 square metre extension to the company’s freezer store in Vantaa. However, demand and occupancy are so high that, even before the new extension had been completed, the company decided to start a new one. The new 6,000 square metre extension will enter use in 2020. KWH Freeze has also prepared for further future growth by buying land next to the store in Vantaa.

Stable for other subsidiaries

The future looks stable for other subsidiaries. Stevena successfully enhanced its presence in Hanko, Uusikaupunki and Naantali. In Naantali, new operations were acquired to support continued growth and consolidate Stevena’s position in the port. Blomberg Stevedoring, with operations in Vaasa, Kalajoki and Kristiinankaupunki, also enjoyed strong growth at all its locations.

In the Industrial Service segment, Adolf Lahti continued to grow. The company, which has specialized in logistics solutions for industry, began operating in two new locations in 2019; Kärkölä and Heinola. The machine hire company Vaasa Stevedoring changed its name to Blomberg Rent.