Investments in sanding machines and a new digital platform

Mirka offers a broad range of groundbreaking sanding solutions for surface finishing and precision sanding. As the inventor of dust-free sanding, Mirka is able to offer total solutions in which sanding materials are supplemented by innovatively designed machines and polishing agents.

This is something that not all competitors can offer, and it has helped Mirka achieve its current position as a global technology leader. Mirka’s other success factors are a corporate culture characterised by a desire and ability to constantly develop and a large global sales network.

Growth despite a challenging market

In 2019, the world was at the end of a historically long economic boom. At the same time, there was great political instability with the threat of a trade war. The automotive industry itself was at a turning point, with strong demand from politicians and the public to develop electric and green models.

All of these events on the macro level mean that the market situation is more challenging for Mirka today than it has been for a long time. There are more uncertainties than before and it is harder to anticipate the inflow of orders. Many customers and distributors are cautious on account of global uncertainty.

Despite the challenges, Mirka still managed to grow in 2019, although the growth was lower than before. To some extent, Mirka is protected from economic fluctuations as the company operates on many different geographical markets. There is also great variation between customer segments. Therefore, Mirka’s business model provides a certain amount of stability in an uncertain world.

One reason why Mirka succeeded in growing last year despite the challenging global situation is that the company’s sanding machines are in high demand. Mirka began making sanding machines just ten years ago, but the machines already account for a significant percentage of all sales.

The secret of the success is that, using patented technology, Mirka can make strong, light machines that provide superior ergonomics and sanding results. Mirka is also able to offer customers its machines and sanding materials as total solutions, which optimises the final sanding results. This is a clear advantage over competitors that are primarily machine manufacturers.

New battery-powered machines were launched in 2019, as well as Mirka’s first robotic sanding machine called AIROS. The previous machine models are also still selling well. The machines are made in Finland to ensure quality and avoid product piracy. Over the years, they have won many prizes for their design and ergonomics. 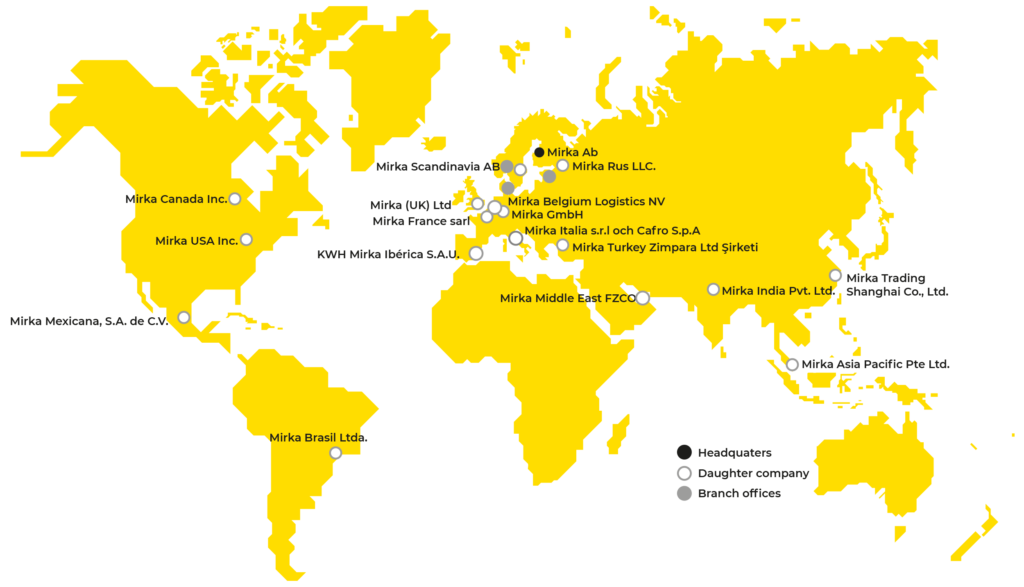 A new digital platform takes Mirka into the future

To prepare itself for this development, Mirka began an extensive project to build up a digital platform. The idea of the platform is that it should support and provide infrastructure for the entire customer journey.

The platform will make it possible to find more potential customers, and also to sell more to existing customers. It will also be an important tool for Mirka’s distributors worldwide, while, for customers, it will mean a great improvement to the customer experience. The construction of the platform is a huge project that will take Mirka far into the future.

Mirka takes responsibility for the environment and the local community

Mirka has taken an ambitious approach to the environment for many years, and the company has been a pioneer in the industry on environmental issues. Mirka’s largest production plant, its factory in Jepua, has been fossil-free for several years now.

Nevertheless, sustainability means more than ceasing to use fossil energy. Mirka’s operations are also sustainable in that they sustain the local rural community. One of Mirka’s principles is always, where possible, to buy goods and services locally in the region of Ostrobothnia or in Finland. Just over 20% of purchases are made locally, and 40% in the country of operations. As goods are transported shorter distances contributes to also a better environment.

Mirka has with its European industry colleagues taken the initiative for SEAM (Sustainable European Abrasive Manufactures) programme, which was launched in early 2020. The idea is to broadcast the message that sanding products made in Europe meet high standards in terms of the environment, health and safety, and are therefore high-quality products.

For Mirka, the company that invented dust-free sanding, these things have been a matter of course for many years. In the years to come, health issues will feature increasingly in Mirka’s communication and marketing.

In 2019, Mirka opened a new office in Vaasa. It is designed for a modern way of working in an open, pleasant working environment. In addition, work to enhance health and safety in all of Mirka’s factories continues.