Mirka has seen strong growth, particularly on its domestic market in Europe. The company grew faster than the industry average yet again.

Mirka is the world leader in surface finishing technology and offers a broad range of groundbreaking sanding solutions for surface finishing and precision mechanics. The company’s vision is to achieve a market position where customers and associates see Mirka as a market leader and a highly responsible company which promotes innovation within its own core areas. Thanks to ongoing commitment to development and the global sales network, Mirka can serve its customers by offering them a broad product range of top-quality sanding and polishing materials as well as innovative tools.

Mirka has been a global technology leader in the sanding materials industry for many years, which has been reflected in the fact that the company has been able to grow faster than its competitors. Mirka’s overall solution, in which sanding materials are supplemented by machines and polishing agents, is not something that all competitors can offer, and has helped the company achieve its current position. Of all its markets, the domestic market in Europe grew particularly well last year.

More staff and a boost to the unit in Belgium

Mirka now has around 1,450 employees, 10% of whom were employed during the year. The company has never before employed as many as 150 people in one year. The appointments were made to strengthen the organisation and the global sales network so that the company is ready for the next stage in its growth. As part of its efforts to attract new staff, Mirka opened new offices in Vaasa and Pietarsaari.

Some of the recruitment was due to Mirka acquiring its distribution warehouse in Belgium, and the acquisition included 64 employees. The distribution warehouse in Belgium serves the entire European market and has become increasingly important for Mirka. This is also why the company decided to take over the warehouse. At the same time, the unit in Belgium was expanded with a new conversion unit and a service unit for sanding tools which will enter service in 2019.

One of the reasons for Mirka’s success has been investment in its own sanding machines, allowing the company to offer overall solutions to its customers. The machines have previously landed several prizes in the RedDot Design competition, and last year another machine joined the list when LEROS won a prize for its pioneering design. Like Mirka’s other tools, it was developed and is made in Finland. Mirka also launched several new machine models during the year, and continued to reap the benefits of previous years’ popular models.

In addition, Mirka launched two new sanding material products, Iridium and Novastar. This was done using an entirely new type of launch process to optimise the products’ lifecycles, which are becoming shorter and shorter. Mirka has been working actively to accelerate the process of bringing new products to the market in large volumes and has found a concept that works.

For many years, Mirka has been investing specifically in being the most sustainable company in its industry. To reduce its carbon footprint, the company built its own power station at its factory in Jepua. This utilises the waste from production and makes the factory independent of fossil fuel use.

The company’s environmental work has continued with the development of resourcesaving, environmentally friendly new production processes, particularly for curing. When the processes enter into use, energy requirements will fall further. 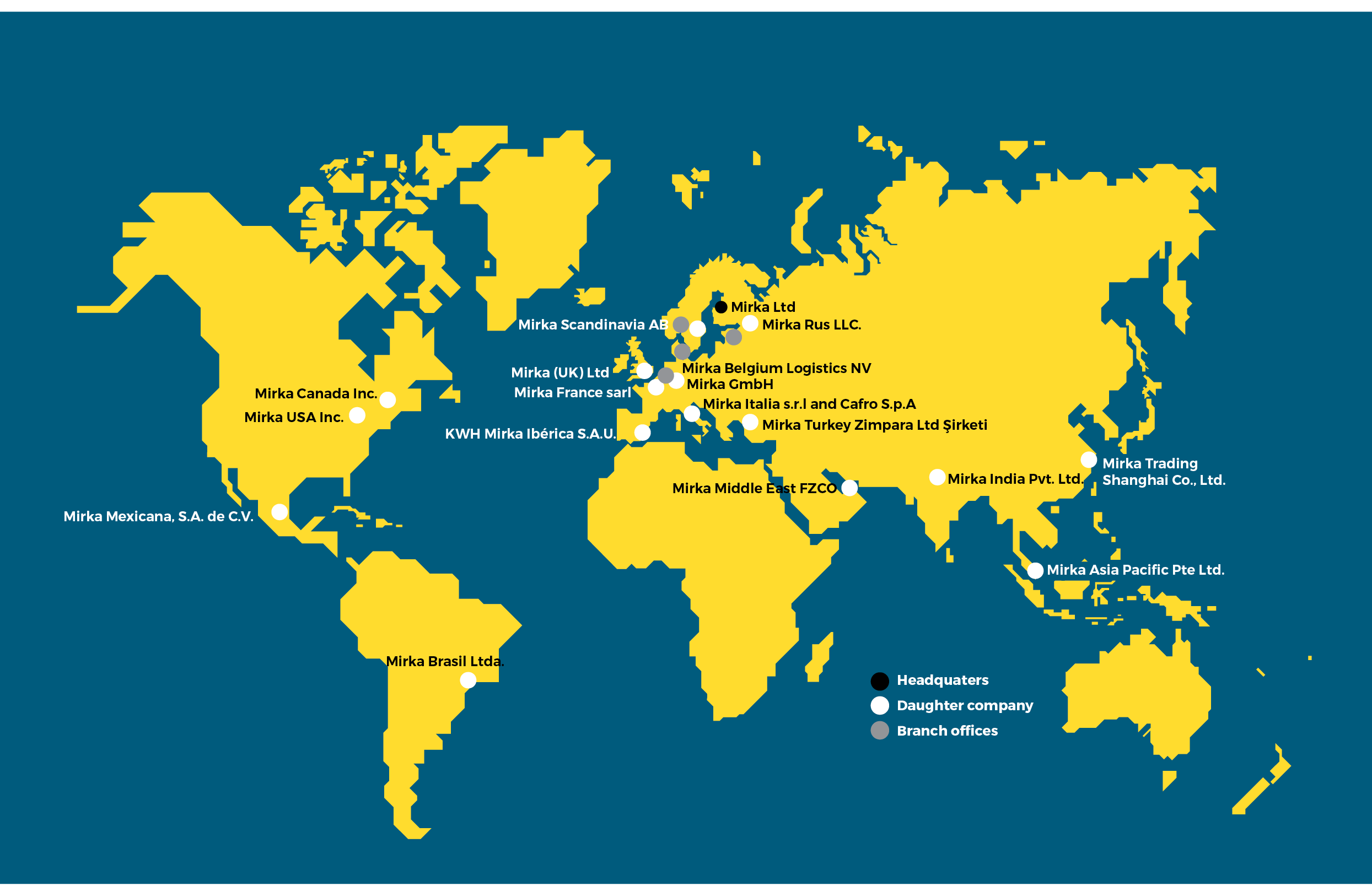 The Italian company Cafro, acquired in 2017, has now been integrated into Mirka’s operations. The acquisition takes Mirka into an entirely new field, precision sanding.

This involves fine sanding small products for which the results must be extremely precise, such as electronics and motor parts. The need for this type of sanding will grow, and Mirka is now well positioned in this market segment. At the same time, this creates an opportunity to reach entirely new customer industries in addition to the automotive, wood and construction industries, which have traditionally been Mirka’s core area.

Investments in staff and safety

In addition to record numbers of new employees, Mirka made other investments in staff during the year. Last year, the company primarily focused on leadership and supervisor training, as well as on preventive health work for those who work on several shifts.

Mirka also continued its steady work to reduce the number of accidents at work. The factory in Jepua beat a ten-year-old record for the number of days without accidents.

What will the world look like in five or ten years? Mirka gave special consideration to this question in its strategy work last year, including all possible scenarios and analyses of the business environment. Mirka is convinced that digitization will take full effect in the near future, and this will include industrial sales and distribution.

The company has already started to prepare for this development by building up an entire ecosystem of services related to its products. The myMirka app can be connected to Mirka’s machines and gives users the opportunity to plan maintenance and monitor vibration exposure in real time, for example. This is yet another way of extending the overall solutions for which Mirka is already known.

A 75-year-old with a bright future ahead

Mirka has been owned by the KWH Group since the 1960s, but the company was founded in 1943. This means that Mirka turned 75 last year. The anniversary was celebrated at work by staff around the world with coffee and cake on the company.

Mirka is now a global pioneer in its industry. Although the market situation seems more uncertain than for many years, and economic growth worldwide is weakening, Mirka is still planning for continued growth in 2019. This outlook is based on forecasts from Mirka’s sales companies around the world, and is proof that the company’s staff have faith in both the market and Mirka’s concept.