KWH Logistics is continuing the strategy that has already proved successful: to let its independent subsidiaries grow with the support of a financially strong owner.

Since 2004, KWH Logistics has grown annually by an average of around 10%. This strong growth continued in 2018, when the Group increased its sales by nearly 15% on the previous year.

KWH Logistics is Finland’s biggest port operator and also the leader in transit traffic in Finland. The company’s strength lies in its ability to create efficient overall logistics solutions for its customers by means of new investments and new business concepts. The Group has chosen a structure with independent subsidiaries as this permits both customer proximity and specialisation in certain sectors and locations.

In addition to the subsidiaries having a clear competitive advantage thanks to the KWH Group’s financial strength, they can also share the costs for administrative functions. During the year, KWH Logistics reinforced its joint functions by means of reorganisation and recruitment. The idea is for cross-functional teams from different units to develop the processes and expertise of the staff.

KWH Logistics is also working hard to develop the company’s brand. The aim of the project is to make the Group’s brand uniform, create a sense of community between the subsidiaries and boost recognition among customers.

Cold Storage
Handling and storage of frozen and chilled foods.

Industrial Services
Handling, storage, and transport of goods, construction excavation, workshop for heavy machinery, in-plant service logistics and other related operations together with rental of small machinery and scaffolding.

KWH Freeze is Finland’s leading frozen storage company, offering the most efficient link in the logistics chain for frozen foods. The company primarily offers customised solutions for the food industry.

KWH Freeze’s growth continued to be stable during the year, and the company was able to increase volume and occupancy in its stores. To meet growing customer demand, work has begun to extend the store in Vanda and is expected to be completed in autumn 2019.

KWH Freeze was one of the first Finnish companies in the industry to obtain the new FSSC 22000 certification. This certification guarantees that food safety is maintained at a high level throughout the logistics chain.

The industry as a whole underwent major restructuring, changing the flows of goods and creating new growth opportunities for the company. Growth in 2019 is expected to continue to be stable.

An eventful record year for Rauanheimo

2018 was a record year for the company for both sales and profit. The main reason for this was that the company established itself in many new locations, which immediately began to produce dividends. Rauanheimo also achieved the volumes in 2018 for which previous investments in the port in Vuosaari had laid the foundation.

One of the new operations was in Mussalo, which belongs to the ports of Hamina and Kotka. The company in-vested in storage capacity of over 30,000 m2 there, and is now well placed to expand operations.

Operations in Hamina were expanded with the addition of new customers. Rauanheimo has also gained a strong foothold in Oulu, where it invested in infrastructure and took over management of the port’s cranes.

Another major investment concerns transit transport of coal and other goods via Tahkoluoto. Rauanheimo is investing in a terminal for materials handling, which will greatly improve the capacity of the port.

The company has also signed a letter of intent with the port of Hanko with the aim of developing the port in Koverhar for both transit and domestic transport. All of these investments lay the foundation for strong growth in 2019. 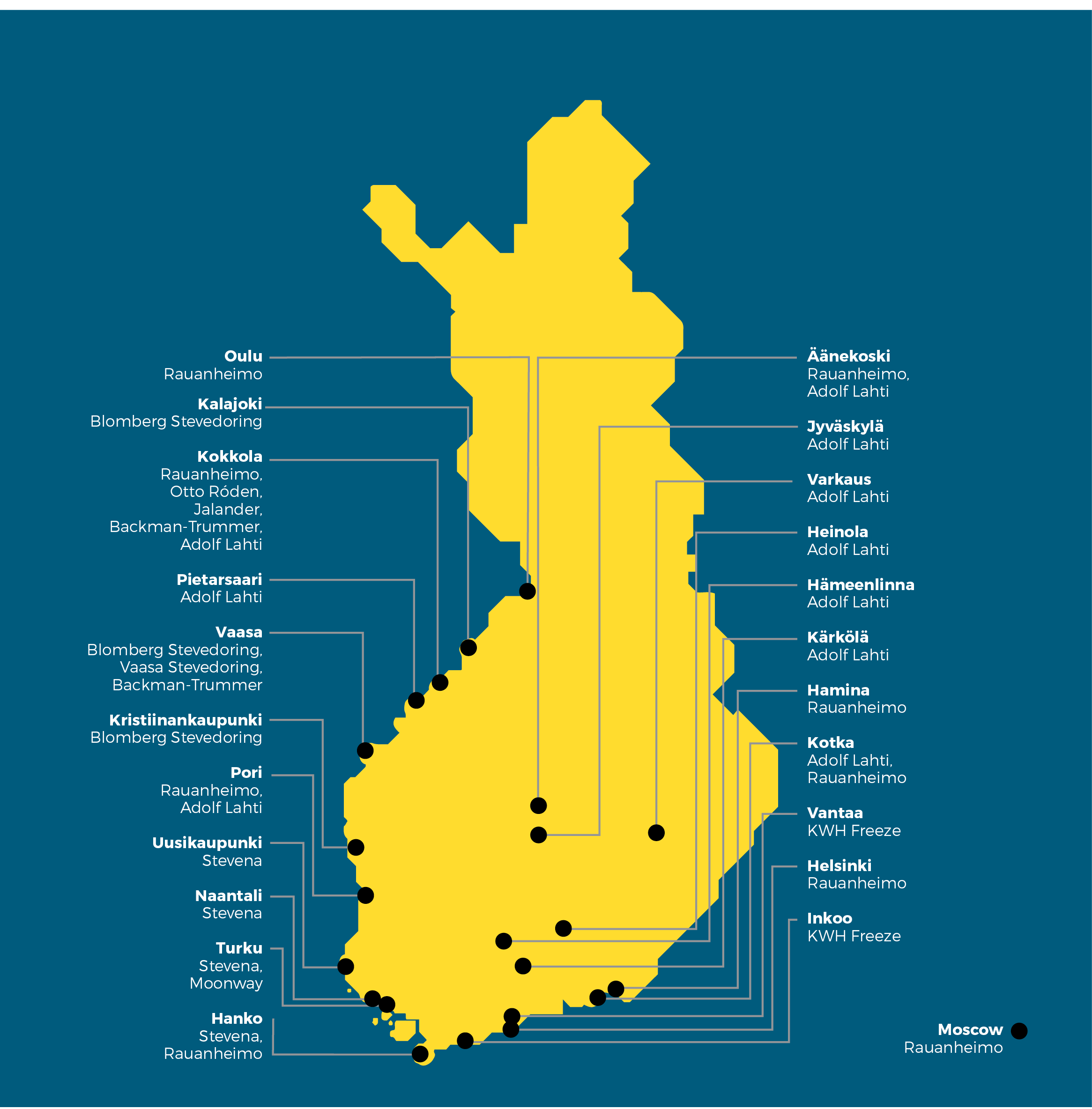 Otto Rodén operates in Kokkola and offers stevedoring services, internal transport between the port and the heavy industry site, and goods handling via the production facilities. The company has many years’ experience of handling bulk products and chemicals, among other things.

Jalander offers ship customs clearance in the port of Kokkola. Thanks to the company’s good contacts with authorities, principals and operators, it is able to ensure 24-hour flexible services for the ships that visit the port.

Both companies’ operations continued at the same good level as in the previous year, and the outlook for 2019 is good. In addition to growth in Kokkola, new markets are also being investigated.

Blomberg Stevedoring offers stevedoring and storage services in the ports of Vaasa, Kalajoki and Kristiinankaupunki. The single largest product group is raw materials for the fodder industry, in which the company is the largest player in Finland. Other important parts of operations are project and general cargo transport, handling of wood pulp and raw materials for bioenergy production.

The company made large investments during the year to improve capacity and its range. The investments proved to be justified.

The flows of goods that Blomberg Stevedoring handles are very stable, which also means that the company’s operations are founded on stable ground. The company has been granted AEO status by Finnish customs.

Stevena grew by 20% and handled record volumes of goods

The port operator Stevena’s good growth figures are primarily due to the growth in RORO traffic from Hanko and Uusikaupunki, which is due in turn to the good situation for the car plant in Uusikaupunki and for the Finnish export industry in general.

Stevena made a number of investments during the year to meet increased demand. The company enhanced its presence in Hanko by investing in a new workshop, a wash hall, an office and a machine hall. Machinery was also renewed at all operating sites.

The company also invested heavily in automation, reducing the need to secure loads manually. This is a good example of how KWH Logistics enhances the efficiency of the logistics chain by making investments with its customers. Stevena’s outlook for 2019 is stable.

The freight forwarder Backman-Trummer’s competitive strength is based on innovative, customised logistics solutions that are actively developed in partnership with customers and partners. Recent growth is primarily due to good local knowledge, international collaboration networks and tailored logistics solutions.

2018 was a stable year for Backman-Trummer without any major surprises. Sales were at the same level as the year before, and profit rose. There are now clear signs that the major investments made in 2016 have started to bear fruit, and the future looks promising. The new general cargo terminal in Vaskiluoto was not yet in full use in 2018. However, thanks to greater industrial interest in Vaskiluoto as a location, the outlook is promising.

Backman-Trummer has a large proportion of loyal, returning customers, making its operations stable. The company has a clear competitive advantage in that it can offer its customers fast service, which is often the most advantageous solution in terms of overall costs. The company has also been granted AEO status by Finnish customs.

Moonway is investing in growth

Moonway operates on the international tank container market, with the focus on continental Europe. The company’s specialist area is bulk container freight for both liquids and powders.

Moonway began an investment programme during the year as the outlook looks promising. There are clear signs that profit is growing, for which reason the company is prepared to continue its investments in 2019.

Adolf Lahti grew fast for the tenth year in a row

Adolf Lahti is a growing company in the industrial services sector, with a comprehensive range of machinery. The company offers expert knowledge and modern equipment for most of the work involved in bulk handling, heavy internal transportation, factory services, workshop services and maintenance.

Last year was no exception in the company’s positive growth, and it landed several interesting new contracts. An important part of the company’s strategy and success is that, with Rauanheimo and VR, it creates large units that permit service for customers from door to door. In addition to the forestry industry, the company will invest increasingly in the mining industry and other heavy industry in the future.

Vaasa Stevedoring specialises in renting of small machines, aerial platforms and scaffolding in the Vaasa region. When the construction industry is booming, this is also reflected at Vaasa Stevedoring. The company’s sales therefore grew dramatically in 2018, and its profit also rose.