KWH Logistics is Finland’s biggest port operator and the leading player in Russian transit traffic. The Group also operates in a number of other logistics areas. Among other things, it has the largest freezer store in Finland.

KWH Logistics grew fast throughout the past decade. The driving factors behind the growth were restructuring in the sector, the outsourcing trend in industry and higher flows of goods through Finland.

KWH Logistics has invested heavily to allow it to grow over the years. The record investments that started in 2019 were largely completed in 2020. Investments totalled just over EUR 54 million during the year.

The single biggest investment was an environmental-friendly system for bulk handling in the deep-water port of Tahkoluoto in Pori, where the subsidiary Rauanheimo has started its operations. After a slight delay, the system was taken into use in late winter 2021.

Another major investment was in Mussalo, which belongs to HaminaKotka port. In 2020, a brand new unloading terminal for rail wagons was completed, and Rauanheimo also invested heavily in storage capacity in the port. The company now has over 50,000 m2 of own storage on the site, as well as operational responsibility for storage owned by customers.

2020 will go down in history as the year in which the Covid-19 pandemic hit people and economies worldwide, but KWH Logistics was ultimately affected very little by the pandemic. The majority of flows of goods continued at a stable, normal level, and some even increased as a result of the pandemic. For example, there is increased demand for cellulose as a result of the growth of e-commerce and thus demand for packaging.

KWH Logistics’ sales were slightly higher than in 2019, but the major investments made have laid the foundations for significantly higher growth in the years to come.
Like everyone else, KWH Logistics hopes, of course, that the pandemic will be overcome as soon as possible so that society can return to normal. KWH Logistics therefore has cautiously positive expectations of 2021.

The subsidiary KWH Freeze, which offers frozen storage, has made big investments in recent years. The latest extension of the freezer store in Vantaa was completed in 2020, and the new building now also has its roof covered by solar panels. The solar power plant reduces the company’s carbon dioxide emissions by nearly 100,000 kg a year, which is equivalent to the emissions from driving 800,000 kilometres in a car.

Due to high demand, KWH Freeze has already submitted an application for a building permit for a new expansion, which is expected to be ready for use in early 2022.

KWH Freeze experienced a fall in demand in 2020, when the hotel and restaurant sector was hit hard by the pandemic. However, it was possible to largely compensate for the decline with increased demand for frozen products in the retail trade.

New places on the map

Rauanheimo is the subsidiary of KWH Logistics that has grown most in recent years, and the company now operates in all of the major ports in Finland. In 2020, Rauanheimo became established in Tornio, where operations were facilitated by a long-term agreement with Outokumpu. Rauanheimo’s investments there included five new cranes in the port.
Container management was also expanded at the Vuosaari Harbour in Helsinki in 2020.

The subsidiary Adolf Lahti, which offers services to industry, has also grown fast. The company became established in Kärkölä in southern Finland during the year. Due to its versatile and comprehensive service product range, KWH Logistics can provide its customers with full-service solutions and assume total responsibility for their logistics.

Stability at all business units

2020 was also a good year for other subsidiaries, given the Covid-19 situation. The port operator Blomberg Stevedoring has been busy, largely due to increased demand for handling of wind turbines.

The port operator Stevena, which operates in western Finland, was affected to some extent by the downturn in the automotive industry, but 2020 turned out to be a good year after all.
Blomberg Rent, which hires out equipment for the construction industry, benefited from extensive activity in the construction sector in Vasa. 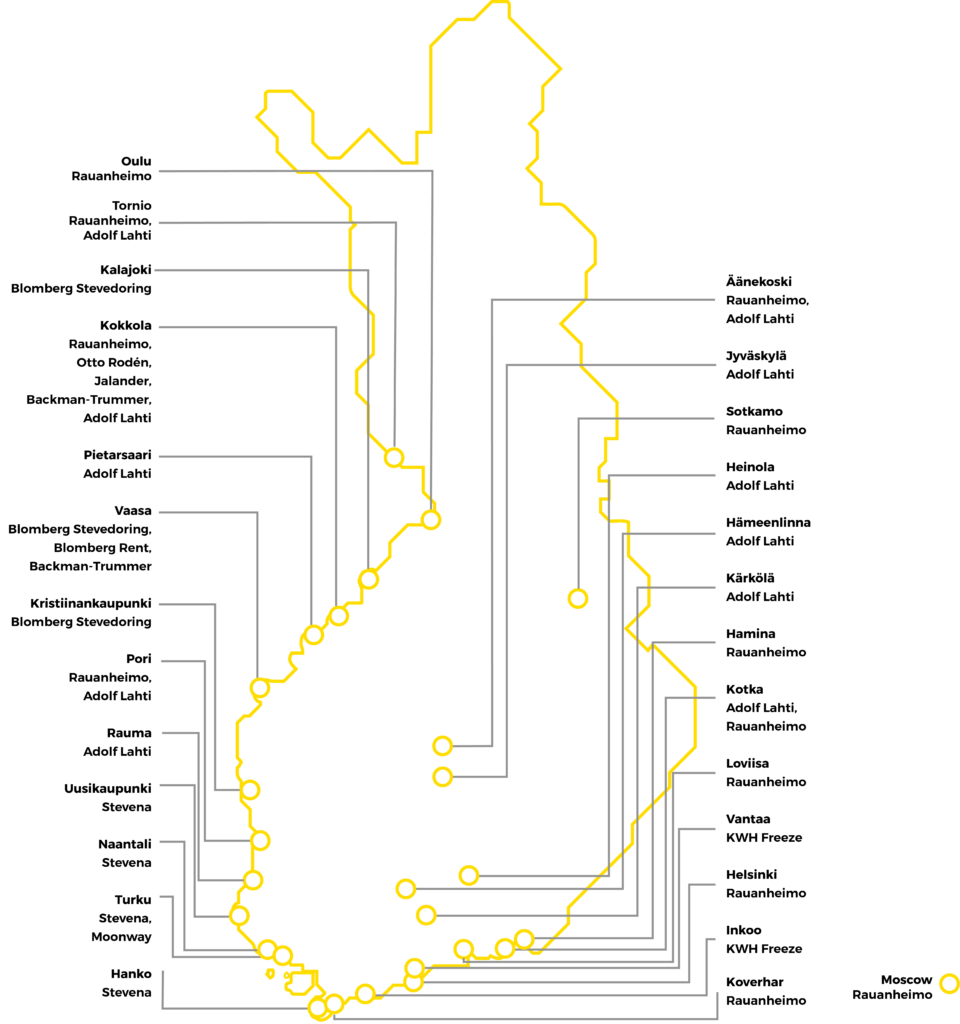 KWH Logistics continued to strengthen its support functions, in other words HR, ICT, Marketing and Finance. In 2020, digital transformation continued to be in focus and many digitalisation projects were completed during the year. For example, a new CRM-software was taken into use within KWH Logistics and furthermore customer-specific, integrated digitalisations projects were completed with some of the biggest customers.

In the Port Logistics business unit, the roll-out of the new resource management system was continued to accelerate the work processes and to improve the quality of material handling.