The rapid recovery of Mirka after the initial pandemic shock saw a strong continuation during all of 2021. The company achieved sales records month after month and was also able to capture new market shares.

The year 2021 was a year of steady and high growth for Mirka, as many previous sales records were beaten. When Covid-19 suddenly appeared in the spring of 2020, Mirka experienced, like many other companies around the world, a sudden drop in orders.

But even so it wasn’t long until the market for Mirka had recovered. From the third quarter of 2020 Mirka has had strong and rising sales which continued all through 2021. And the company has not only grown but also managed to capture new market shares from the competitors. One of the proofs of that is that Mirka has grown also within those customer segments which were negatively impacted by the pandemic, such as the automotive aftermarket.

Already during the spring 2021, Mirka could see that the trend was pointing steadily upwards, and proceeded to adjust budgets and sales goals upwards.

So what are the reasons that Mirka has managed so well during the pandemic?

Firstly, Mirka has the same high-quality requirements when it comes to reporting as they do for their products. The well-developed reporting has given Mirka an exceptionally good basis for decision making, almost in real time, which has made it easy to make quick but also well-founded decisions.

Secondly, the corporate structure at Mirka, with sales companies located around the world, is perfectly adapted to work effectively even during times of crisis. Since Mirka’s salespeople don’t operate out of Finland, but rather locally in their respective markets, they haven’t been impacted as much by lockdowns and international travel restrictions. The salespeople were quick to go out to customers as soon as the restrictions allowed it.

Another reason for Mirka’s rapid comeback is that they never laid off staff. That means that Mirka was able to meet rising demand with full force as soon as the market recovered.

Lastly, many of Mirka’s customer segments actually benefited from the pandemic. When people weren’t able to travel, they instead spent their money on renovations and construction. Political stimulus packages have further increased the rate of construction. And as everyone knows, construction and renovations require abrasive materials. 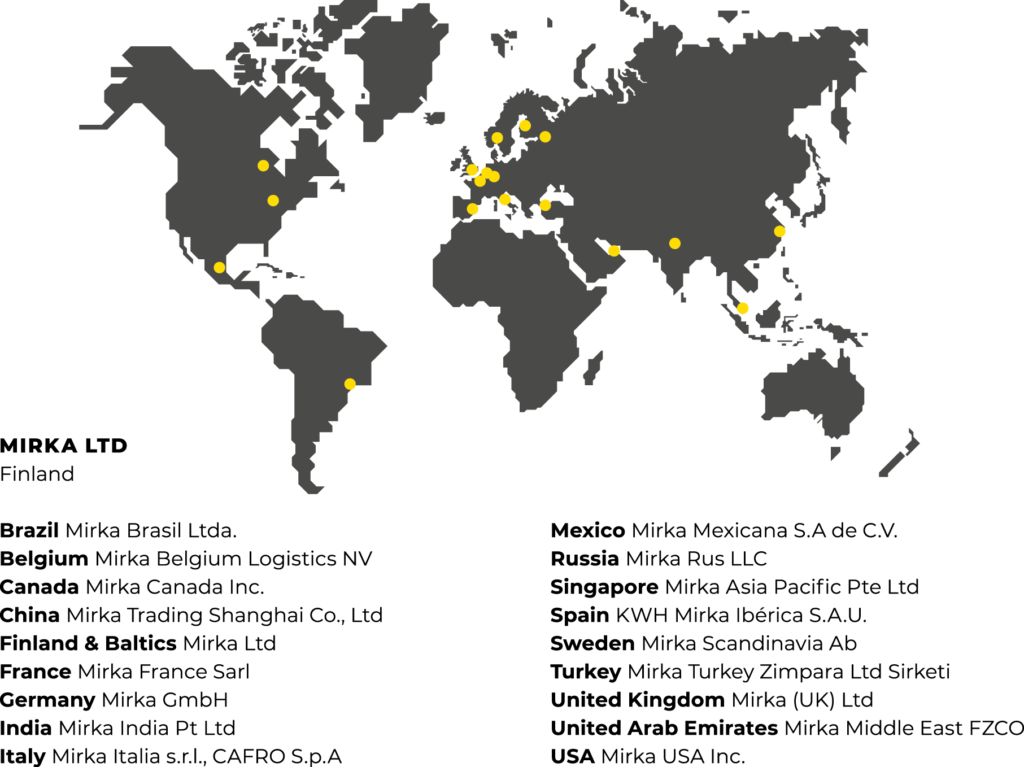 The large growth during 2021 came mostly from the abrasive materials division, but also Mirka’s division for Power Tools has seen a continued growth. Sanding tools have been one of Mirka’s success stories during the last years, and the tools have won several prizes for their light weight and ergonomic design.

As a rule, the tools are for manual sanding, but during 2021 Mirka was able to launch its first sanding tool designed for robots, Mirka® AIROS. The robot tool is an important launch and will be followed up with more sanding solutions for robots.

Another step which strengthened Mirka’s position within solutions for industry was the acquisition of the Italian company Urma Rolls. In 2021 Urma Rolls become a wholly owned subsidiary of the company Cafro, which Mirka acquired in 2017.

Urma Rolls is a highly specialized company producing dressing rolls and tools for precision grinding. The requirements for these correction tools are very high, with tolerances requirements within microns.

The precision grinding business, where the work is done with superabrasive diamond tools, differs in a lot of ways from Mirka’s traditional business, even though they both concern sanding and grinding. The goal of Mirka is to be able to offer a complete portfolio; grinding products, polishing solutions and diamond tools.

The pandemic has given the whole world a crash course in digitalization, something which can also be seen in the changed purchasing behaviour among customers. Mirka is far ahead the rest of the business when it comes to new digital sales and distribution channels. This is thanks to the large investments made by the company in this area since 2017. 2021 was the year when Mirka could finally start to cash in on these investments in electronic retail and marketing automation.

The investments in work safety also continued throughout the year. Mirka has been able to keep the amount of Covid-19 infections at a low rate thanks to careful safety routines.
One of the biggest challenges after the pandemic is the welfare of the staff after the disappearance of a large part of the social interaction. This is why Mirka is investing a lot into strengthening the working community and well-being at the workplace.