Mirka offers a wide range of solutions for surface finishing and precision sanding. The company specialises in total solutions in which the abrasives are supplemented by innovatively designed machines and polishing compounds.

Mirka achieved its current position as the global technology leader as a result of having invented dust-free sanding at the turn of the millennium. Mirka’s other success factors are a corporate culture characterised by a desire and an ability to constantly develop as well as a large global sales network.

Mirka’s biggest investments in 2020 were in digitisation, above all in building a new digital customer experience platform. Work began in 2019 and continued in 2020, and the platform has now been partly taken into use.

The digital platform is designed to transform operations to make them entirely digital, and integrates a large number of functions such as:

The construction of the platform went entirely to plan, despite all work being done remotely on account of the Covid-19 pandemic. The quieter period at the start of the pandemic could also be used to train staff, primarily sales staff, in the new digital tools.

Mirka is now continuing to train customers, distributors and its own staff in the new way of working, aiming to further develop B2B e-commerce.

Growth in the Construction and Decoration sector

As for so many other companies, 2020 was characterised by the Covid-19 pandemic for Mirka. From a broader perspective, the pandemic hit certain sectors hard, while others instead benefited from it. This is clearly reflected in Mirka’s operations. While, for example, the automotive industry suffered a decline, the Construction and Decoration sector experienced a boom as people were able to spend more time at home, with time and funds to renovate. Mirka’s Construction & Decoration sector therefore grew dramatically during the latter part of 2020 and now accounts for a significant proportion of sales.

Rapid recovery from the pandemic

At the start of the year, Mirka could already see that sales in China were being affected by the Covid-19 pandemic, but the first quarter was still in line with the budget. In mid-March, the pandemic broke out properly in large parts of the world, and Mirka quickly lost a large proportion of its sales.

The company reacted fast and was able to make significant savings in a short time. When the restrictions were eased in May and June, customers returned almost overnight. In the summer, sales were back at the 2019 level.

Record sales in the autumn

Autumn 2020, in turn, was a period of strong recovery for Mirka, with record sales for four full months in a row. Looking at the big picture, it can be said that Mirka emerged from the pandemic almost unscathed. Total sales for the year were only just below the 2019 level and the operative result was also at a good level. Mirka made savings by furloughing staff and by incurring significantly lower costs for trade fairs, travel and events.

It is also worth noting that Mirka managed to capture market shares during its recovery, and that the company recovered from the crash faster than many of its competitors. Mirka estimates that the strong recovery during autumn 2020 will continue in 2021. By autumn 2021, operations are expected to be back to normal. 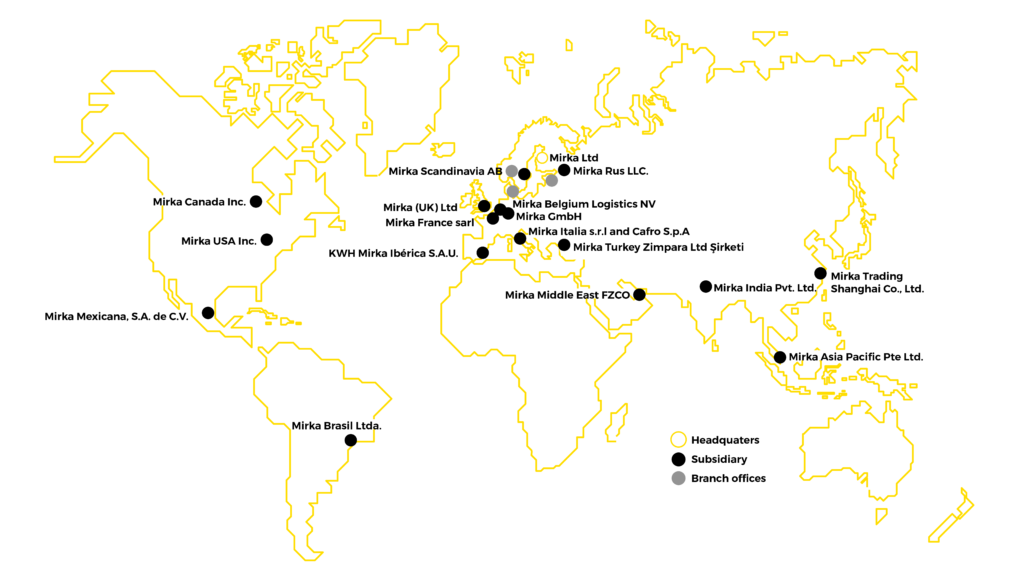 Strengths during the pandemic

The rapid recovery from the pandemic is partly due to the fact that Mirka is extremely well organised. The company has very well developed reporting, which proved to be worth its weight in gold in 2020 as it was possible to see trends early and react almost in real time.

The pandemic also showed the benefit of Mirka’s longstanding major focus on health and safety issues. Thanks to strict safety procedures, Mirka’s organisation and production facilities were 100% ready to deliver at all times, and there were no cases of infection in production facilities. Consequently, money spent on health and safety at work should not be seen as expenses, but rather as investments that produce a return.

Mirka also works systematically on these issues at European level through the trade association SEAM (Sustainable European Abrasive Manufacturers), which was launched in early 2020.

Another of Mirka’s strengths that have become very clear during the Covid-19 pandemic is the company’s structure, with subsidiaries and sales companies throughout the world. As sales are made not from Finland but via independent local companies, the organisation is more resilient. This meant that operations could continue throughout, despite the introduction in most countries of various types of lockdown, restrictions and travel bans.

Another major initiative in 2020 was the extension of Mirka’s head office in Jeppo, Finland. The oldest part of the office was demolished to make room for a meeting facility three times its size, called Mirka Home. It was possible to adapt the building to the new flexible way of working, in which much of the work is done remotely. Among other things, all meeting rooms have integrated options for remote meetings, and the workstations are planned on the basis that Mirka employees will continue to work remotely for some of the time after the end of the pandemic.